Lampworking is the process of making glass beads by winding molten glass around a metal mandrel, which has been coated in slip. The hot glass can then be shaped and decorated in a multitude of ways before being very slowly cooled (annealed).

Example of glass beads date from as early as 2300 BC and techniques have advanced, declined and been rediscovered many times throughout history, by different cultures such as the Mesopotamian's, Egyptians, Romans, Celts, Vikings, Franks and Venetian's.

Many of the beads that I have made for this Viking necklace are specifically modelled on beads found at the Frojel archaeological site. The blue spirals, green cylinders with black feathered lines, green rounds with black and white stripes, red with green and blue eyes', cream with grid pattern and the blue, black and red rectangles are all recreations of Frojel beads.

Some of the other beads in the strands use similar designs, in different colour combinations. I have also included designs that were available in period, such as raked dots and multiple stacked eye beads, as Viking beads were collected from many areas. I have also included plain spacers, to extend the length of the strand (as would have been done in period, as beads were quite a precious commodity) and also incorporated these into circular pendants, as seen on the Viking Treasure Necklace found at Hon, Norway. The tokens (from a previous Rowany Festival) and the Wyvern pendant are included to aid in the authentic presentation of the piece, as Viking Necklaces often contained treasures', such as coins and book mounts. The 2 focal beads on the top strand are eye beads, a style common to many different cultures across the world, which believed they warded against the evil eye.

The Frojel images on the CD-ROM Viking Beads from Frojel Port of Trade', is an excellent resource for recreating Viking beads. I have experimented with various colours and finishes to match what I believe the beads would have looked like before the ravages of time took effect.

Throughout period, the mandrel (the rod that creates the hole in the bead) has been created from green twigs, copper wire and metal rods coated in clay slip. My modern mandrels, which are coated in a commercial bead release (basically, slip plus some other ingredients), matches the latter technique most closely. They are readily available, safe to work with and the most functional, aiding in the easy removal of the beads after cooling.

I have created my beads using a propane-fuelled torch as the heat source. Other than this, the production method is very similar to period times. The use of a gas torch allows a high degree of safety, reliability and portability over that of a period furnace' with an open fire inside.

The process of creating the beads is outlined in the attached diagram.

My beads have also been kiln annealed, which makes them stronger and much safer. In period times, beads may have been annealed on a pan near the coals of the fire, or near the furnace. I believe it is important to anneal, as both now and in period, handmade glass beads were considered precious, therefore I want them to last as long as possible. There is also the safety factor, as un-annealed beads can shatter with no warning.

In assembling the necklace I have chosen to follow the theory that suggests that Viking necklaces were not random designs. I have repeated several designs at intervals and kept the colour range to a minimum.

I chose to create a Viking Necklace to display my lampworked beads, as Vikings collected beads from all over the world, as well as producing their own. They were also known to pass beads down as heirlooms (beads from 400AD have been found in Viking graves from 1000AD). This means that their collection demonstrates a large range of designs, techniques, colour and styles, allowing me room for experimentation.

I updated my Viking strands in 2008. They now include 3 strands, and all the feature beads are recreations of archeological finds, including new beads in the style of those I photographed in the Louvre and The British Museum. Many of the bead styles are featured in my bead timeline. 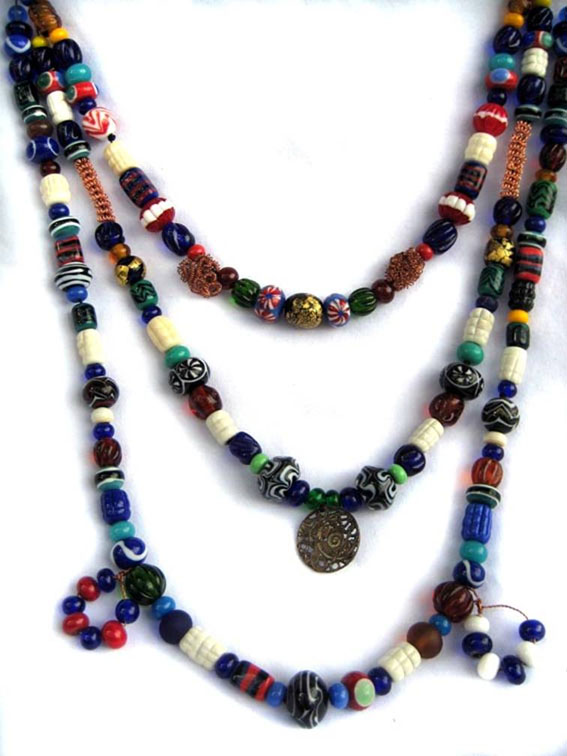 Beads: An Exploration of Bead Traditions Around the World.' Janet Coles & Robert Budwig

Viking Beads from Frojel Port of Trade' CD-ROM from www.arkeodok.com

A History of Lampworking' www.global-flamework.com